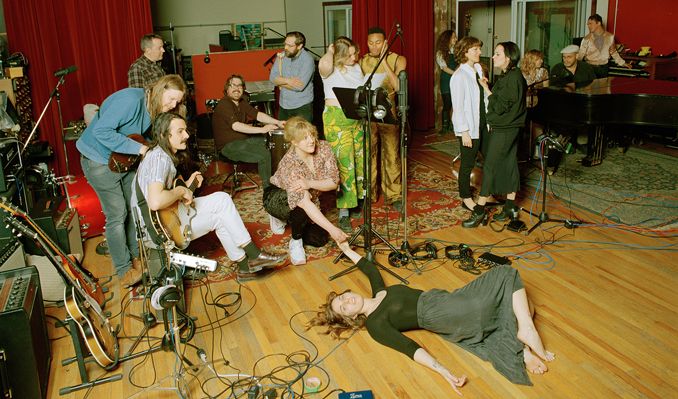 The U.S. Girls show at The Sinclair on May 7, 2020 has been cancelled. If you purchased your tickets via AXS online or phone, a refund will automatically be issued to the credit card you used to purchase within 30 business days. Otherwise, refunds are available at your original point of purchase.

This year marks a significant anniversary for U.S. Girls, the protean musical enterprise of multi-disciplinary artist, Meg Remy. 10 years ago Remy first used a 4-track recorder and a microphone to self-produce a series of spontaneous, starkly musical, ‘instant expressions’. These collisions of static, clang and sung melody seem in retrospect like a uniquely American display of minimalism, an unmistakably feminine counterbalance to Nebraska or Rev & Vega’s early sonic confrontations. In contrast, her latest work for 4AD and Royal Mountain Records, In A Poem Unlimited, Remy’s 6th album and 2nd LP for the label, was painstakingly crafted in multiple studios by a creative cast of 20+ collaborators. Remy traverses an immediate and increasingly politicized vision over the course of this decade of work. And while U.S. Girls, denoting the plural, is no longer a misnomer, In A Poem Unlimited may be Remy’s most individually distilled protest to date.

Opening with a dark, conga-infused drum break, lead-off track ‘Velvet For Sale’ establishes a moody, distinctly mysterious feel. If Half Free (Remy’s 2015 4AD offering) trafficked in dusty, sample-based textures, Poem represents an inversion of that instrumental formula; the non-sampled rhythms are themselves eminently sample-able. The newfound grooviness speaks to a central element of the new album’s collaborative spirit. All tracks save for two were performed by The Cosmic Range, an accomplished instrumental collective from Toronto, Remy’s adoptive hometown. Assembled by Matthew Dunn in 2014, The Cosmic Range is composed of some of Canada’s most accomplished improvisers, and includes longtime U.S. Girls producer / foil Maximilian ‘Twig’ Turnbull. The Range--whose eclectic combination of improvised psych, jazz, and propulsive dance music was first recorded on their 2016 New Latitudes debut (Idée Fixe)--is put to work here on a song cycle that is typically diverse for a U.S. Girls album. Remy is not content merely to establish a new sonic palette on successive albums. Instead she approaches each song as its own encapsulation, with the effect that her oeuvre is essentially genre-agnostic. On Poem, the buffet of sounds comprises a dizzying variety: disco, employed as a protest vernacular (‘Mad As Hell’), as well as an unrelenting assault (‘Time’); Remy’s beat-driven impulse, extended via The Cosmic Range’s vamping on hip hop producer Onakabazien’s produced loops (‘Incidental Boogie’ & ‘Pearly Gates’); moody, slow-burning funk, on the Twig co-writes (‘Velvet For Sale’ & ‘L-Over’); and forming the emotional core of the album, two earnest synth anthems, written in collaboration with D.C. based instrumentalist, Rich Morel (‘Rosebud’ & ‘Poem’).

As hectic as the stylistic detours may sound on paper, Remy and mixer / co-producer Steve Chahley will a consistent aesthetic into being, however multi-dimensional. With a voice as assured and engaged as Remy’s, track to track, one sees that genre-partisanship, in the contemporary music landscape, represents an irrelevantly conservative approach. The artist is intent on liberation both sonically and lyrically.

Poem features dark meditations reflecting charged atmospheres that directly precede and follow acts of violence. Many of the songs are character studies of women grappling with power; how to gain and exert it spiritually, as well as desperate strategies to mitigate its infliction. In ‘Pearly Gates’ a woman ingeniously decides to seduce St. Peter to assure heavenly entrance, to mixed effect, while in ‘Incidental Boogie’, a battered woman muses ironically that her partner’s abuse leaves so little physical evidence she can continue to show up at her job. Almost all of Remy’s lyrics seem to interrogate notions of morality, and the universal consequence of its deferment. As has so long been suggested in the artist’s work, action and inaction both have broad civic consequences. There is no escaping that the personal is entrenched in a political dimension and an acknowledgement of that may be the only liberator.

In an era of heightened turmoil, artists contend with a crossroads decision on cultural content, and how we engage with it as individuals. There is no shortage of media that lends distraction and offers a balm of comforting fantasy. For those, on the other hand, craving a thoughtful and probing inquiry into the iniquity of power, In A Poem Unlimited poses a substantial question; can you dance while you think?

FacebookOfficial Website
*Service and handling fees are added to the price of each ticket.
Cancelled