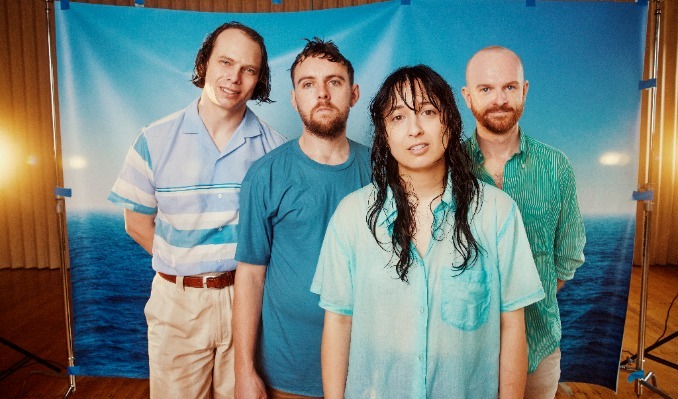 The Beths return with “A Real Thing,” their first new song since the release of 2020’s Jump Rope Gazers. “A Real Thing” comes as The Beths begin their long-awaited North American headline tour, which has been rescheduled twice due to the ongoing COVID-19 crisis. Last year, the band released Auckland, New Zealand, 2020, a live concert recording that showcased the infectious energy The Beths bring to every performance, and what audiences have been so dearly missing.

“‘A Real Thing’ is a kind of anxiety dream. It’s a bit muddled, a bit frantic, a bit sinister,” says lead singer Liz Stokes. “It’s what came out of my guitar in late 2020, post NZ election (and U.S. election). I was limply reaching for optimism about the future, but was really just marinating in dread.” Ultimately playing more apocalyptic scenarios of climate change in her head, Stokes’ lyrics include specific references to how New Zealand has dealt with sea level rise in the past: “In NZ people sometimes use tyres and cement to build retaining walls by the water, to try to stop the land being eroded away as the sea encroaches. It doesn’t really work.” It’s a poignant image for a band that has had to navigate the constant changes in our present moment.

The deep bond between Stokes, lead guitarist Jonathan Pearce, bassist Benjamin Sinclair, and drummer Tristan Deck, has allowed them to overcome challenging circumstances and that’s present in the upbeat urgency of “A Real Thing.” It’s palpable from the very start and paired with the band’s signature bright, raucous guitar hooks and cooing harmonies; the song races and soars, much like an increasing heart rate. The Beths’ infectious and insightful songwriting on “A Real Thing” is an exciting marker of more excellent work to come, and the perfect way to mark the beginning of tour.

FacebookOfficial WebsiteMore InfoTwitterYouTube
*Service and handling fees are added to the price of each ticket.
Buy Tickets