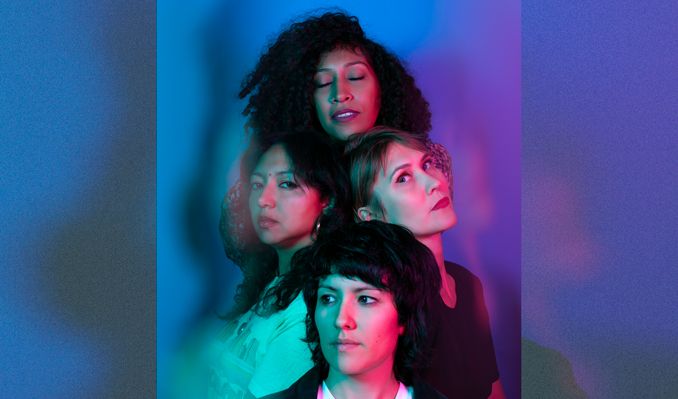 For most, a brush with death would be cause for retreat, reflection, and reluctance, but Seattle band La Luz found something different in it: resilience. Having survived a high-speed highway collision shortly after releasing their 2013 debut LP It’s Alive, La Luz, despite lasting trauma, returned to touring with a frequency and tirelessness that put their peers to shame. Over the past year-and-a-half of performing, the band arrived at a greater awareness of their music’s ability to whip eager crowds into a frenzy. In response, frontwoman Shana Cleveland’s guitar solos took on a more unhinged quality. The basslines (from newly-installed member Lena Simon) became more lithe and elastic. Stage-dives and crowd-surfing grew to be as indelible a part of the La Luz live experience as their onstage doo-wop-indebted dance moves.

When it came time to record Weirdo Shrine, their second album—due out August 7th—the goal was to capture the band’s restless  live energy and commit it to tape. In early 2015, Cleveland and Co. adjourned to a surf shop in San Dimas, California where, with the help of producer/engineer Ty Segall, they realized this vision. Tracking most of the album live in shared quarters, La Luz chose to leave in any happy accidents and spur-of-the-moment flourishes that occurred while recording. Cleveland’s newly fuzzed-up guitar solos—which now incorporated the influence of Japanese Eleki players in addition to the twang of American surf and country—were juxtaposed against the group’s most angelic four-part harmonies to date. The organs of Alice Sandahl and the drumming of Marian Li Pino were granted extra heft and dimension. Thematically, Cleveland channeled Washingtonian poet Richard Brautigan on “You Disappear” and “Oranges,” and sought inspiration from Charles Burns’ Seattle-set graphic novel Black Hole.

The resulting album is a natural evolution of the band’s self-styled “surf noir” sound—a rawer, turbo-charged sequel that charts themes of loneliness, infatuation, obsession and death across eleven tracks, from the opening credits siren song of “Sleep Till They Die” to the widescreen, receding-skyline send-off of “Oranges” and its bittersweet epilogue, “True Love Knows.”

In describing Weirdo Shrine, Segall remarked that it gave him a vision of a “world…burning with colors [he’d] never seen, like mauve that is living.” In “Oranges,” the Brautigan poem which inspired the aforementioned track of the same name, the poet writes of a surreal “orange wind / that glows from your footsteps.” These hue-based allusions are apt: the sound of La Luz is (appropriately) vibrant, and alive with a kaleidoscopic passion. Weirdo Shrine finds them at their most saturated and cinematic.

FacebookMore InfoOfficial WebsiteTwitter
*Service and handling fees are added to the price of each ticket.
Buy Tickets