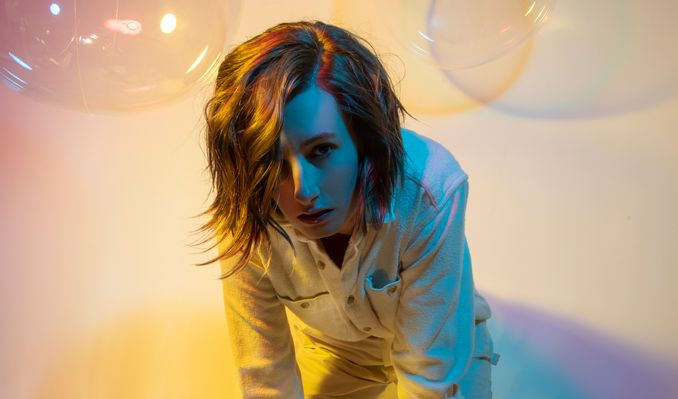 Slothrust is principal songwriter, singer, guitar player and unrepentant aesthete Leah Wellbaum, with drummer Will Gorin and bassist Kyle Bann. On their fourth full-length album The Pact, Slothrust constructs a luscious, ethereal cosmos perforated with wormy portals and magic wardrobes, demonstrating more clearly than ever the band’s deft shaping of contrasting sonic elements to forge a muscular sound that’s uniquely their own. The album was recorded in Los Angeles with producer and mixer Billy Bush (Garbage, Neon Trees, The Boxer Rebellion).

Cultivating their potent brew of classically informed, soulful rock in the fertile Brooklyn indie scene, Slothrust released their debut LP, Feels Your Pain, in 2012, followed by 2014’s Of Course You Do. The band expanded their fervent following via the song “7:30 am,” selected as the theme for the FX Network show "You’re The Worst”.  Their 2016 Dangerbird debut album Everyone Else established the band as a breed apart, capable of serving up deceptively clever epics that veer satisfyingly between incandescent riffing and pop hooks, winsome anxiety and powerful heft.  Throughout 2016 and 2017, Slothrust lit up audiences on sold-out headline tours, festival dates and support tours with Highly Suspect in the US and Manchester Orchestra in Europe. The band closed out 2017 with Show Me How You Want It To Be, an EP of of unexpected and inventive covers of songs by artists as diverse as Al Green and Britney Spears, Black Sabbath and Louis Armstrong.

Official WebsiteTwitterMore InfoFacebook
*Service and handling fees are added to the price of each ticket.
Buy Tickets