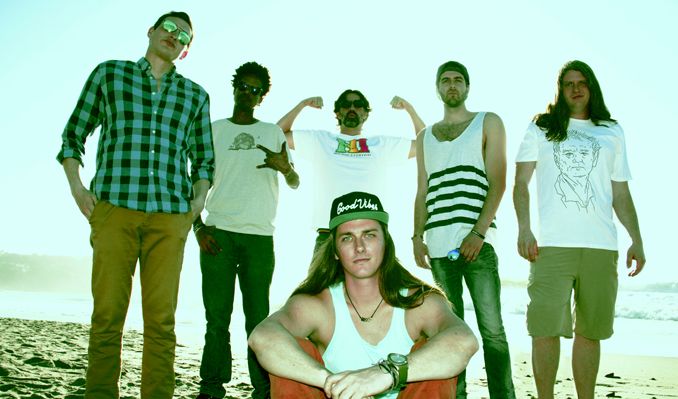 Not long into the writing and recording process of their fourth studio album, Setting in the West, reggae-fusion act Spiritual Rez knew they were creating something special. Under the guidance of producer Kenny Carkeet, a founding member of AWOLNATION, the eclectic sextet fused their high-energy reggae sound with an edgy contemporary pop polish.

Tireless touring and a higher education in music has found Spiritual Rez in complete harmony on stage; forging a reputation as a live act that never fails to exhilarate a crowd. Carkeet describes them as “one of the hardest working bands in showbiz.” He’s also taken note of their years of hard work paying off in the studio, saying, “Each one of the guys are incredible with their instrument, which made my job easy. Frontman Toft Willingham’s outstanding voice was really fun to work with.”

To date, Spiritual Rez has shared the stage with notable names likeGeorge Clinton and Parliament
Funkadelic, Steel Pulse, Jimmy Buffet, and countless others. “I have total confidence in every member of our operation on and off stage,” says lead vocalist and guitarist Toft Willingham. “Having recorded four albums before Setting in the West, we felt honed and ready to bring that confidence to the studio.”

Setting in the West is a conglomeration of story songs, love songs and songs featuring a common
message from past Spiritual Rez records: follow your dreams and never give up. “Our last record was very politically and socially driven,” Willingham recalls of their 2014 self-produced concept album, Apocalypse Whenever, which reached #2 on the Relix/Jambands Radio Chart and #8 on the iTunes Reggae Chart. “For this album, we wanted to break away from that and write about love and things that resonate with the masses. We wanted to tell stories and encourage people. Determination has always carried us as a band. After college, we were homeless for four years, just touring nonstop, committed to never giving up.”

Despite the contrasting lyrical content, the subject matter is always positive. “Red Room,” a reggae-rock banger meant to inspire the youth to chase their goals, features Duddy B of The Dirty Heads, as well as co-writing by Goldfinger’s John Feldmann. Setting in the West features additional notable collaboration with rising reggae star Hirie on the ballad “Together Always,” and the trombone stylings of Reel Big Fish’s Billy Kottage on “Bad Girl.”

The reggae-hip hop anthem “Sober,” is a tale of a party romance with an infectious chorus. “‘Sober’ has the best chorus we’ve ever written,” says Willingham. “Our bassist Jesse Shaternick brought the groove to the band. Jesse, Kenny Carkeet, and our drummer Ian “Meat” Miller fleshed out the track while Max and I wrote the lyrics. It just flowed.” Willingham is referring to Max Collins of Eve 6, who co-produced and co-wrote the record. Collins says of the band, “They create their own world, and it was such a joy to be immersed in their deep, warm psychedelia.”

In addition to Willingham, Shaternick, and Miller, Spiritual Rez is rounded out by Mohamed Araki
(keys), Quinn Carson (trombone) and Julian Dessler (trumpet). Setting in the West was recorded at Jim Kaufman Productions in Los Angeles, Hookbeat Studios in Venice Beach, CA and 9B Studios in Milford, MA.

The album’s last track, “Digital Age,” delivers a message to not fear change, but to embrace it.
Willingham explains that it’s the last song on the album for a reason. “It embodies our desire to progress and never stop striving to make the best art possible,” he says. “To have made it this far doing what we love and not see an end in sight is a testament to hard work, but above all, it’s a blessing.”

“Working with Spiritual Rez was such a fun time. Each one of the guys are incredible with their
instrument, which made my job easy. Toft’s outstanding voice was really fun to work with too. Super happy for these guys, one of the hardest working bands in showbiz.” – Kenny Carkeet (AWOLNATION)

“It was such a pleasure to make a record with this troupe of insanely talented weirdos. They create their own world and it was such a joy to be immersed in their deep, warm psychedelia. Sounds so sexual! Cuz it is!” –Max Collins (Eve 6)

Read More
*Service and handling fees are added to the price of each ticket.
Get Tickets